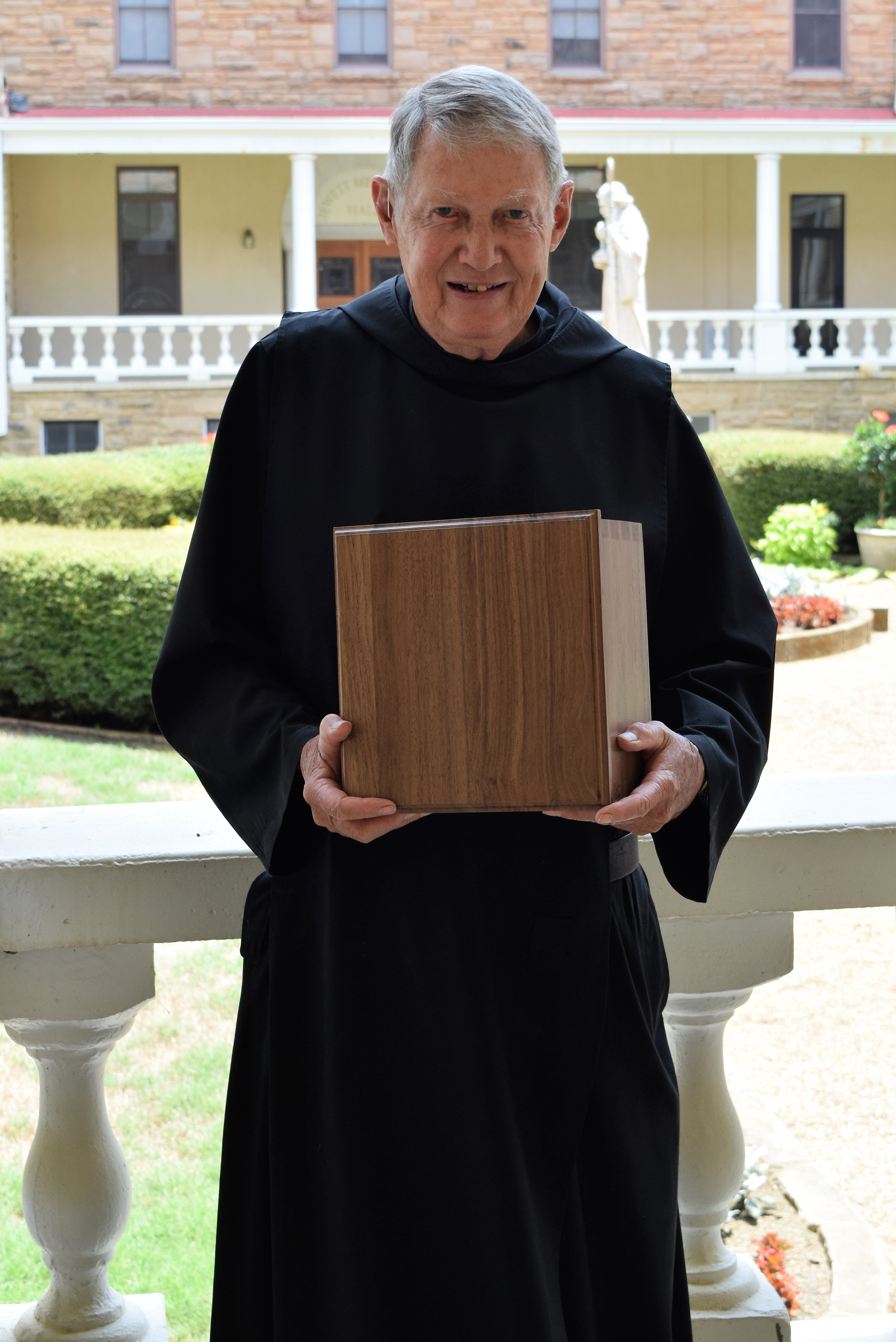 In addition to his fine handcrafted bowls, Fr. Jerome now offers his skills to craft memorial urns that honor a deceased loved one's cremains with a noble simplicity of monastic craftsmanship:

I love working with wood, but if I had not joined a monastery I might never have known it.   I had no history of woodworking when I entered the monastery, but a necessity in the community propelled me into it and I have been doing it ever since.

In the early 1970's the Abbey was customarily using for monks’ funerals the cheapest coffins available from the local funeral home. Meanwhile, in the larger society there was a movement toward attractive homemade coffins and encouragement for quality in materials to be used in liturgies. A few monks began asking why we didn’t make our own coffins, since we had the timber, a sawmill, and carpenters.   Homemade coffins wouldn’t cost any more but would be significantly more substantial and attractive. We presented a proposal to the Abbot and Monastic Council and it was approved.

We had several deaths in the next few years, but there was no change in the practice because none of our carpenters had undertaken the building of coffins. They had plenty of other projects.

Our interest was aroused again at the death of Pope Paul VI in 1978 when a simple wooden coffin was used for him. I asked Brother Jude Schmitt, one of our carpenters, if he would take me through the steps of building a coffin modeled on the one for Pope Paul, which was pictured in TIME magazine. He knew I had no experience, but said if I could build a small one, a prototype, I could build a large one. So with his help I successfully built a prototype, and worked a long time on the full size coffin which was finally completed in 1979. It served for the funeral of Brother Gerard Kaufman in February, 1980.

I have been making the monks’ coffins ever since. I found not only that I could do the work but that I had a latent talent for it, and I began to undertake other projects. In the 1990's, with the help of Brother Jude and Father Andrew Wewer, I began using the lathe and turning out wooden bowls and making various craft items for our auctions and online store.

When we inaugurated our Columbarium for the burial of ashes, I was asked to investigate making the funeral urns that would go in the burial niches. With the help of others I developed a design for the walnut burial urns for our Columbarium that would also be able to be made available more widely.

Our urns are sized so that two of them (in case of a married couple) may be inserted in a standard 12”x12”x12” niche. The walnut container with dove-tailed fittings measures 10 inches x 10 inches x 5.5 inches and weighs about 4 pounds.  We can also offer laser engraving on the front of the urn if desired.  Likewise, if you are looking for a place to repose the cremains of your loved one, then you may want to consider our Subiaco Abbey Columbarium. The columbarium is situated adjacent to the Abbey cemetery where the monks are buried. It is not for the monks ourselves, but is being made available to anyone having a desire to be in a holy place where prayers are offered for the departed. You can find more information on the columbarium by clicking HERE.